Resumption of the development found under the site: ftp://ftp.uni-stuttgart.de//pub/systems/acorn/riscos/maths/pari The Pari program was written at the University of Bordeaux and adapted on an Archimedes in 1992 (v1.36). GP and PARI are copyright C. Batut, D. Bernardi, H. Cohen and M. Olivier.
GP is a calculator which uses the PARI library to do the calculations. I added the part marked with curves in high resolution. In fact I was looking to draw curves, PARI knows a lot of functions (I know very few). ! PariCalc is a graphical interface of GP, under RISC OS allowing the drawing of exportable curves in! Draw and CSV format.

The purpose of this software was to be able to do the calculations and curves necessary to create documents in Techwriter. There is still a lot of work to be done, particularly on the Plots obtained. But today these can be completed in !Draw and used directly in software that accepts files of this type (Techwriter for example) .

Another way to use the results of the calculations is to export in CSV to the !Tau software, which has a variety of tools to format this type of data. Texts containing results in the editor can be "drag & drop" in a word processor. This program is only at its beginning and will evolve in terms of functionalities, in particular the wrapping of curves and the formatting of formulas towards Techwriter.

32 bits version from ftp://ftp.uni-stuttgart.de//pub/systems/acorn/riscos/maths/pari
I built the editor and added the plot in high resolution with Draw and CSV outputs. CSV is for import in !Tau. 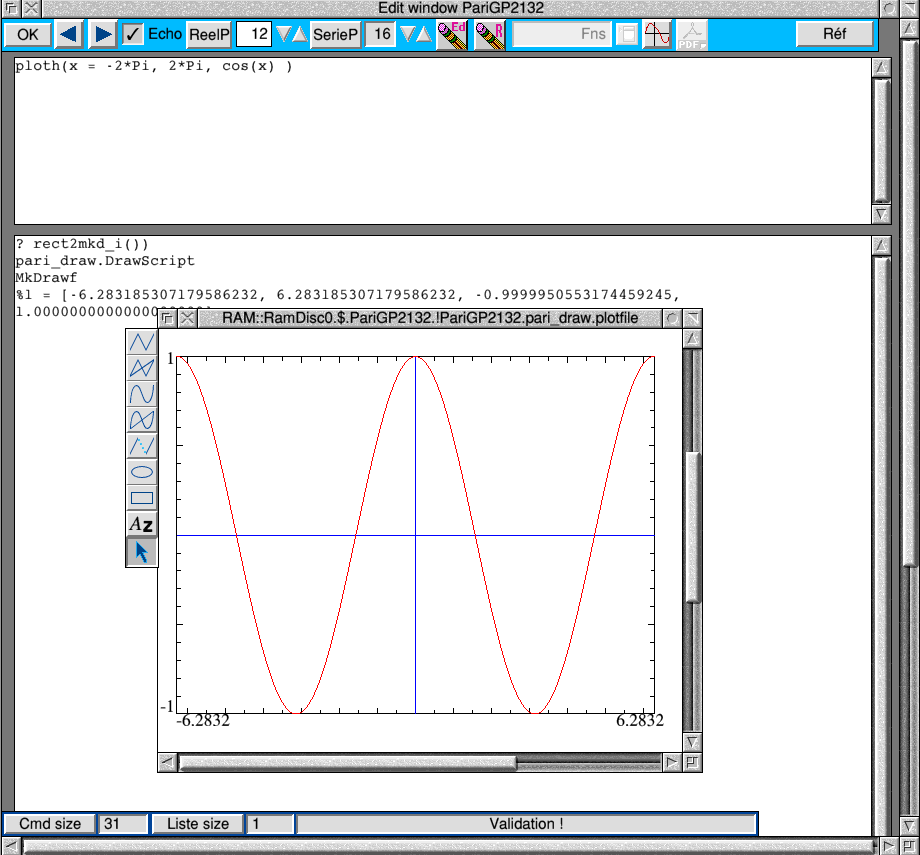 The Pari software has evolved and is actively maintained. http://pari.math.u-bordeaux.fr/
This time the plots are part of the software which was not the case in the previous version. I resumed my development of the editor because many functions were added and the organization of the source reworked, which is a good thing. For the moment the RISC OS editor is working, the plots in postscript too. PariGp235 produces a PDF file with all the plots made in PostScript (thank you! Ghostscr).

I added the possibility of having the same plots in Draw files as those obtained with Postscript using Gareth MacCaughan's MkDrawf software. We get as many Draw windows as there are paths. The syntax is the same as for postcript to execute a plot:

The default plotter is MkDrawf with RISC OS, all plot or graph Pari/GPfunctions are available.

The editor has been changed. the two texts area of the program allow to use ctrl_c and ctrl_v and saving the text. Help for the command buttons. The orders are recorded in a list that can be browsed with the arrows <- and -> Addition of a reference button (help for functions) which connects to the Pari / GP site, therefore up to date ....
At this same address there are also tutorials.